This year so far has not been as eventful as last year in the Halloween department. I went a bit crazy last year and went to probably 5 pumpkin patches and had made part of the girls costumes (they were princesses, which I bought the dresses but made them fancy cloaks and tiara’s).

We decided to take the family out yesterday to the pumpkin patch since we hadn’t gotten our pumpkins for carving yet and I decided to try one on the east side for a change, to say the least it was not that great. Really crowded (to be expected though) and you had to pay additional for EVERYTHING! $3 per person for the hay ride, $2 per kid for the play area etc…

We pretty much got our pumpkins from the pile of pumpkins and checked out a couple of sad animals, the play area and then left. For 3 med-large pumpkins and 2 tiny pumpkins it was $25, which I thought was a bit on the pricy side.I wasn’t too heart broken though since I knew we would be going today with Lilly’s class to a pumpkin patch. 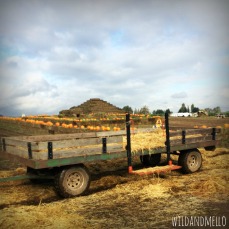 Today the weather was much better, and I have decided Sauvie Island Farms is my favorite one! It is on Sauvie Island BUT its not the bigger “The Pumpkin Patch” which I do still enjoy and have been going there since I was a kid. They have a great hay pyramid, a hay ride, some happy animals (turkey, chickens, bunnies, sheep, goat, cows and emu), they have a maize, and pumpkin chucking. they seem very organized and have a nice clean space. Here you don’t have to pay for any of the extras! Only the pumpkins and produce/food you buy. They don’t have a huge food selection, just some pastries and fresh apple cider but I don’t usually go for the food anyhow. I believe they are open Monday – Saturday and closed Sunday but I would call before hand to make sure. 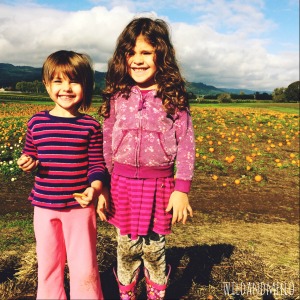 Mia & Lilly on top of pyramid at Sauvie Island Farms

Lilly & Mia doing “princess smiles” for me, Mia cracks me up! More like a pirate smile!

Back to pumpkin carving…

Last year I was so into it and scoured Pinterest and decided upon a sugar skull inspired theme, I cut out the design and then painted it (and glitter of course). 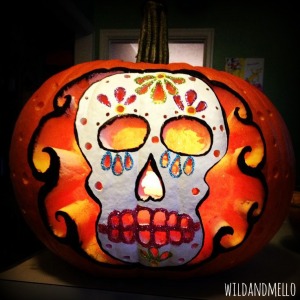 This year I haven’t gotten quite so motivated, I actually didn’t even carve my pumpkin when we were doing it last night! I did carve Mia and Carvers pumpkins though 🙂 a very creative ghostly pumpkin and a fun face! Mike carved out a cat-bat for Lilly and a very scary “Ebola” pumpkin!

I’m thinking I’ll get my pumpkin done tonight or tomorrow and the girls will paint their pumpkins that they got today, I’ll post pictures when they’re all done!